Let's Determine What Tennessee Basketball's 2018 Ceiling (and Floor) Is, Exactly

Every team, minus the mid-major 12-16 seeds and the obvious hacks, start the NCAA Tournament dreaming of winning it all. And, technically, it’s still true: because an 8 seed won it in 1985 and a 7 seed in 2014, anything is possible. A team way off most viewers’ radars can make a surprise run and upset a whole lot of folks. However, most teams have what I’d call a True Range of Outcomes: when narrowed down to the most realistic prospects, this team, around 95% of the time, will accomplish something within this set of outcomes.

There’s something about this Tennessee basketball team that can make a fan fume and celebrate in a 15-minute span. Younger teams have that quality: Tennessee’s given up a 10+ point lead in three of their five losses and have nearly blown large leads in others (Vanderbilt, Furman, NC State). But: the fact they’ve built the leads the first time out is a very positive sign. In terms of average lead/deficit in a game adjusted for opponent, Tennessee ranks 10th nationally on BartTorvik.com. Tennessee’s good, but how good are they when it comes to doing this in March?

Let’s figure it out. Is Tennessee a…

No. It would be nice to say this – and some stats do back it up – but every non-2014 UConn national title winner since 2000 was both a 1-3 seed, went to the previous season’s NCAA Tournament, and had at least a top-18 offense by KenPom. Tennessee likely won’t hit more than one of these, and the offense one is going to be tough to achieve. Plus, like it or not, almost every national champion in the 64/68-team era has had a future first round pick on its roster. Right now, Tennessee isn’t projected to have a single player drafted, period. But hey, that bodes well for next season!

No. This one was tough to come down on: Tennessee, at times, has looked like a legitimate March bracket-buster. They’ve had games against sport elites like Purdue, North Carolina, and the first half against Villanova that showed their potential. But! Of teams that were 5 or better seeds to make the NCAA Tournament, not since 2011 has a team made the Final Four without having either their offense or defense rank 19th or higher nationally in Ken Pomeroy’s rankings. As of this morning, Tennessee ranked 22nd on both offense and defense. It’s certainly possible they place one unit or the other (or both) in the top 19. However, Tennessee also doesn’t meet many historical requirements for 4 or 5 seeds who’ve made the deep run.

Yes. No, seriously. Since 2011, 23 of the 24 Elite Eight teams have at least ranked in the top 40 of Ken Pomeroy’s rankings. Currently, Tennessee’s played seven games against Top 40 opponents. Here’s how those went:

As mentioned previously, there’s an obvious pattern here: Tennessee is pretty imperfect, fairly young, and is prone to blowing big leads. But I care a lot more about the fact they were able to build the leads in the first place – only one other team has led Villanova by double-digits this season (Butler), and they had to hit 14 threes in the first 31 minutes to do it. The win over Purdue gets better by the day. The North Carolina loss still stings, but it’s the only game the Tar Heels haven’t held a first-half lead in since November 2016. Tennessee’s expected wins from these seven games, per their average lead/deficit from BartTorvik.com, is about 3.74, or a little under one more than they’ve received. (The North Carolina game, at 61% win expectancy, was the most likely candidate. Had the Arkansas game counted, it would’ve been just ahead at 62%.) The flashes of brilliance are there, and as many fans know, all you need are the flashes to become a little more common in March.

Plus, take a look at some of the teams who have actually made the Elite Eight since the bonkers 2011 year. 2017 Xavier didn’t win a single game from February 8th to March 4th and had no win over a team ranked higher than #25. South Carolina went 3-7 over their final ten. 2016 Syracuse lost three straight heading into the Tournament. A 2018 Tennessee team that won 23 or 24 games and finished in the top three of their conference would be a boring Elite Eight team, by this event’s standards.

Now, here’s the less fun part: what’s Tennessee’s floor? If you’ve watched this team enough, you know they can look like an Elite Eight contender and a Round of 64 loser in the same half. Take the Missouri game as a recent example: Tennessee raced out to a 17-9 lead 7:44 into the game on the road against what’s likely a 7 or 8 seed in March. Not bad at all! The Vols then proceeded to score 10 points over the next 16:54. That is indeed very bad, regardless of opponent.

There’s a lot of reasons for this, but it boils down to a couple in particular: 19 games in, Tennessee’s best guard (Lamonte Turner?) is its fifth-best player. Also, neither of Tennessee’s traditional forwards (Grant Williams and Kyle Alexander) have serious outside range, so once teams are able to slow down Tennessee’s inside game, it’s all on the guards (or Admiral Schofield) to hit threes or for Tennessee to shove the ball down Williams’ throat and pray for a Williams turnaround hook shot or a foul. Until the guard play gets better or Tennessee finds a reliable third scoring option (Schofield’s #2, for now), the possibility of a Round of 64 loss, in fans’ eyes, becomes more and more pertinent.

So, let’s ask the question. Can Tennessee…

I mean, anyone can, but…I know this is gonna hurt to read again in two months…

No. Call it bias, idiocy, whatever: Tennessee actually matches up very well with traditionally upset-averse teams in the Round of 64. 4-6 seeds from Big Six conferences who score more than 76 points a game (Tennessee sits at 77.1) are 16-4 in the Round of 64 the last three years; the other 20 teams are 11-9. Shot volume matters, too: Tennessee ranks in the 89th percentile nationally in offensive rebounding and is above average at preventing turnovers. A simple equation developed by ESPN’s John Gasaway to measure this goes as follows: OREB% + (100 – TO%). Got it? Well, this should help it make sense: anything over about 112 is at least okay. Anything over 115 is pretty good. Tennessee’s rank of 116 is solid, and 4-6 seeds with a 116+ Shot Volume from 2011 on are 23-8 in the Round of 64 (all others 29-24). Simply put: if you’re a smaller team with smaller players, it’s pretty darn hard to beat a team that keeps getting second chances unless you make a lot of threes. 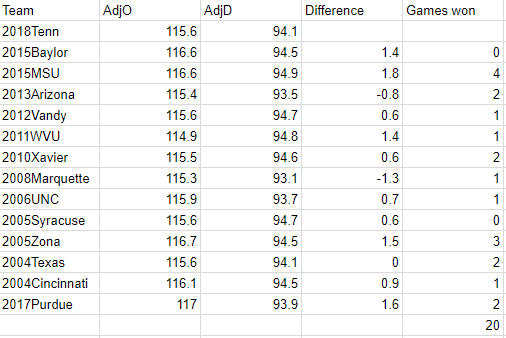 Plus, of the thirteen teams most similar to Tennessee in Ken Pomeroy’s database, pictured above, that ended up with seeds between 3 and 7 (Tennessee’s seed range), only two lost in the first round (by a total of four points). The other 11 won their games against their upset-minded opposition by an average of 9.5 points. History is on Tennessee’s side here. Another historical stat I’m sure you’ll hear now that it has appeared on this site: Rick Barnes hasn’t been on the losing side of an NCAA Tournament first-round upset since 2001 as a 6 seed against Temple (8-0 since).

Could Tennessee draw a bad fit for them (say, New Mexico State) and make this look like a very foolish proposition? Sure. But when your odds have historically ranged anywhere from about 75% to 85% of surviving Day One, it’s hard to bet against you.

Yes. This is not saying they will, but can they? Uh, of course. This one doesn’t require advanced metrics or a deep dive to let you know anything you didn’t already. Assuming Tennessee stays on target for their projected 4/5 seed line, it’s obviously no lock that they make it to the second weekend. Slightly under half (63 of 132, or 47.7%) 4 seeds have made the Sweet Sixteen, while a way lower number of 5 seeds do (43 of 132, 32.6%). If you’re into rooting for seed lines, living and dying over Tennessee getting a 4 seed or better seems like a wise choice. Alternately, you can hope they become the undervalued 6 seed: they make it at about the same margin (41 of 132, or 31.1%) and they avoid playing the one seed until the Elite Eight. Sorry for the anticlimatic ending, but…that’s kind of how this goes.

Hopefully, this all comes true and I look like a genius. It won’t, because the NCAA Tournament is built to make somewhat intelligent people like me look like the dumbest boys alive. It is what it is. Regardless, I’m even surprised at how high Tennessee’s floor appears to be. This falls in line with what I’ve felt for a while: Tennessee has some seriously excellent board crashers (Kyle Alexander chief among them) on their roster, and the recent Derrick Walker boon will only help this. (His action in limited minutes shows him to be the second-best rebounder on the roster behind Alexander.)

Is it frustrating that Tennessee’s offense, at times, looks like a clogged toilet in basketball form? Absolutely. But it’s not the end of the world, people: South Carolina ranked 304th – three hundred and fourth out of 351 teams – in effective field goal percentage in 2017. And that was after adding their excellent Tournament performance! By this standard, Tennessee’s 140th-best shooting offense feels pretty breezy. Does it help to actually make the shots? Uh, ya think? But it helps more to rebound the misses, which Tennessee is excellent at offensively.

Plus, we somehow got this far without mentioning Tennessee being in the 90th percentile nationally in forcing turnovers. No one’s gonna mistake them for West Virginia, but you’d be forgiven for mistaking them for having the profile of a really great upset hopeful. Tennessee likely won’t have a shot at an upset where they’re the kings until the Sweet Sixteen, but as we’ve seen, there’s a decent shot they pull off something special.

…..or they’ll blow a 14-point lead to Arizona in the Round of 32. Either way, it’ll be something special.

In this article:featured, how good are we exactly, NCAA Tournament, Vols, Vols basketball